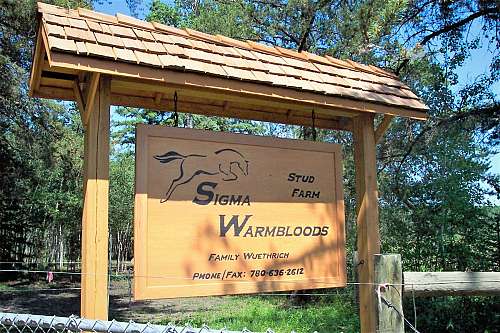 Sigma Warmbloods have been breeding warmblood horses for over 40 years. In 1993, the Wuethrichs imported their first mares from their native Switzerland into Canada. Using these predominantly Swiss bloodlines together with other strong European lines and the Thoroughbred, necessary for today's more modern sport horse, they are breeding an athletic warmblood horse suitable for sport.

Their original stallion, the Approved Swiss Warmblood Goya de Lully, by the Internationally famous Gauguin de Lully, has made a mark in the dressage ring with his beautiful paces and work ethic.... (read more) His first foal crops made their way successfully into the sport.

The importation of the Approved Oldenburg stallion Gervantus II, added a new dimension to the Sigma breeding program with the powerful jumping blood of the Hanoverian stallion, Grannus. The homebred Garfield W, competing as BMO Garfield under Canadian International rider John Anderson, is an outstanding example of what this proven stallion can contribute to North American breeding and is himself the sire of several outstanding individuals.

In late 2004, the warmblood stallions Apanarde & Coka joined their program and contributed greatly to the genetics of the Sigma Warmbloods breeding program. Sadly, they lost Apanarde in 2010, though they do continue to offer frozen semen.

At the end of 2016, Sigma Warmbloods were excited to announce that the premium Hanoverian stallion, Royal Blend, was purchased from the State Stud at Celle in Germany and stood in Canada in 2017-2018.

In the summer of 2018, they welcomed the Hanoverian stallion, Don Rico, on lease from Prairie Creek Stables.

This year, Sigma Warmbloods are proud to announce the purchase of Rock My Soul WF, who will be available for breeding June 2019.