On The Mark GSF is a 2018 gelding by On Target GSF (Orleandro x Lucy Liu GSF v. Lynx). Super athletic gelding who really uses himself well. Lots of hind leg action and suspension. On The Mark GSF is curious, outgoing and friendly. A real pocket pony. He is super willing and works hard to please. Will mature in the 16 to 16.2 hand range.

On The Mark GSF's sire On Target GSF doesn't have much of a show record yet. A freak pasture accident caused him to fracture his right cannon bone just before the stallion test and so now he will be getting his approval through performance.... (read more) On Target GSF is by Orleandro, an imported Holsteiner stallion who competed in both jumping and dressage. He successfully competed at Level 5 Jumpers with 3'9" to 4' fences with 4' to 4'6" spreads and also did some dressage competitions at second level with scores in the high 60s. In 2005 Orleandro was ranked as the 31st and in 2006 ranked as the 13th leading Hunter Breeding stallion with USEF. Orleandro has retired from showing 100% sound and ridable to focus on his breeding career. Orleandro passed away in 2019. Orleandro has many successful offspring in sport in both Europe and the US. Online, owned and ridden by Deborah Walravens of Belgium is competing at 1.45 m which is equivalent to US level 8 which are heights up to 4' 9". Orion CWF, here in the US is competing in the jumper ring at 1.15 m with great success. Orleandro's sire Oglio, a German Thoroughbred, has produced horses at top levels of sport in all areas. Oglio's 1994 son, Ontario competed in show jumping at 1.60m (Grand Prix), Apsolon a 1991 bay gelding, competed at the Grand Prix Dressage level in Denmark from 2002 to 2009 and 1993 son, Ohio, successfully competed up to CIC3* levels with his young rider in Germany from 2005 until 2012.

On The Mark's sire's dam, Lucy Liu GSF, has produced one fully licensed and approved stallion, Flint GSF by Weltstern (Imported Oldenburg stallion/ Competed to Intermediare 1- visit Greenstone Farm for extensive information on Weltstern's pedigree). Lucy Liu GSF is by Lynx, an extremely versatile stallion who saw success in all areas of sport in Canada. He was a 17'2 dark bay/black Holsteiner stallion by Lincoln (Landgraf) v. Caletto II mare. Lynx was the first horse to achieve the Canadian Warmblood Horse Breeders Lifetime Achievement Award earning points in hunter, jumper, event and dressage competitions. His greatest achievements were in dressage at Intermediare 2.

On The Mark GSF's dam, Signature GSF, is a full sibling to Scarlett O'Hara GSF who competed to 3rd level dressage before becoming a hunter. Signature GSF's full brother, Sinco De Rojo GSF, who just recently started showing is competing in the hunters as well and was recently champion of USHJA PEL Hunter 2' division at Princeton Showjumping with 3 firsts and a second.

On The Mark GSF's damsire, Sinclair B, passed the 70 Day Test in Germany. He had a promising jumping career in Europe which was ended abruptly due to a pasture accident. He sired many approved sons, most notably, Southern Star, owned by Nina Melkonian of Germany who was approved for breeding with Hessen and ZfDP with a 100 day test score of 105.99. This stallion has gone on to compete successfully in jumpers (to at least level L) and dressage at FEI levels.

On The Mark GSF is microchipped and has a lifetime recording with USEF. Visit Greenstone Farm for more information. 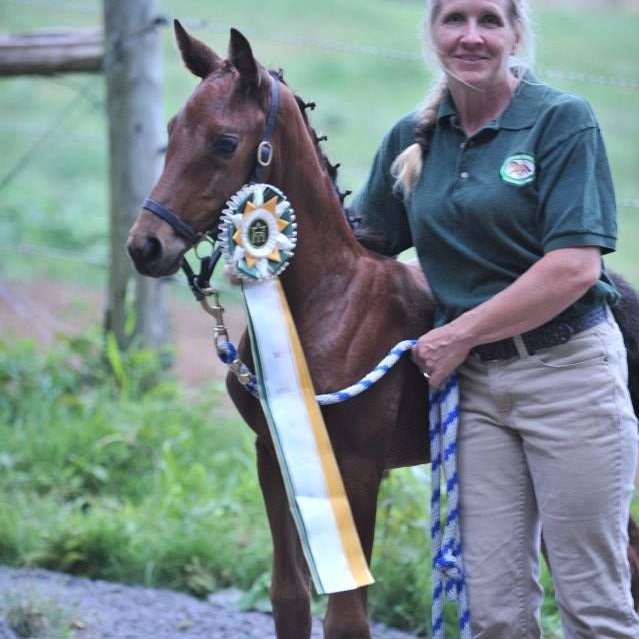