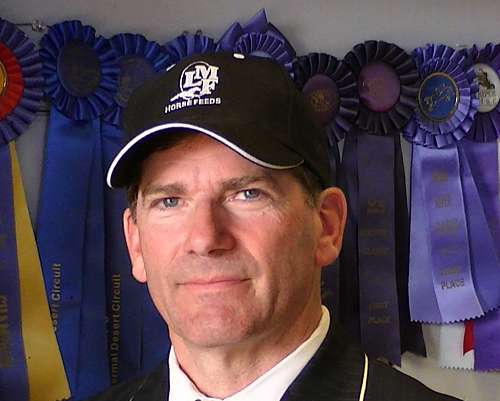 Clay Jackson grew up on a working Quarter Horse ranch in New Almaden in the South bay area of California. Both his parents were avid competitors and breeders, this background brought about an education and desire to ride and compete at a very young age.

Since his first show in 1965, in Danville California, Clay has become a solid trainer and competitor. It was in his thrill seeking 20's, that Clay rode a half sister to a Hunter/Jumper stallion "Truck Driving Man".... (read more) It took no more than a few winning rounds and the future was set, supported by his strong equitation background, hunters and jumpers became his top, life long passion.

Clay is a United States Hunter Jumper Association Certified Trainer. Having spent several decades working with horses, he is always empathetic, and uses techniques to gain their confidence and build trust while constantly seeking to teach the horse, as well as when coaching riders, to perform at their highest level and gets results! Well known for his love of horses, anybody that spends little time with him can see the lifelong bond to the equestrian life.

Continuing his family history, Clay ran his own breeding operation for several years producing quality Quarter Horses and later Thoroughbreds. Owning at one time two graded stakes winning stallions! For over twenty years he worked closely with McFadden Family owned "Pleasure Acres" (est. 1916), starting many dozens of colts each year and later producing hunters and jumpers from the ranks of the non-racing horses. You will still frequently find him starting young horses or re-claiming a "problem" horse as it has always been a strong part of his career. Many of his started or re-schooled horses have gone on to be great athletes for amateur and professional riders in multiple disciplines. Clay has written a few articles and has current equestrian publications seeking his material.

Clay Jackson is a strong advocate of continuing education and attends many clinics every year, schooling and training with top show jumping riders and trainers such as:

Training
Full training and coaching from starting to "A" Circuit
Hunters, Jumpers, Cross Country and Equitation
Sales and aquisitions