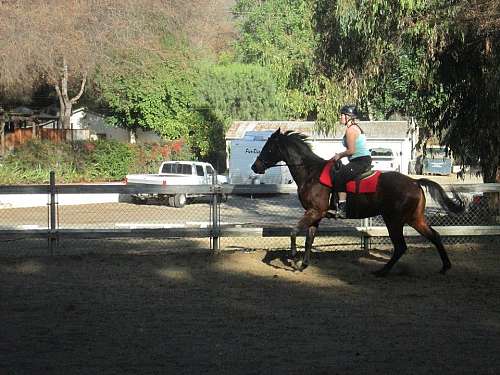 [[I AM AN INSTRUCTOR AT RANCHO DEL RIO'S FUN WITH HORSES
@EL RODEO IN BREA, CA I give lessons at 4449 Carbon Canyon Rd. ]]

{{THESE ARE MY CREDENTIALS}}

{ASSISTANT TRAINER, UNDER (TERRY GUERIN) JUMPER/HUNTER TRAINER MAY 2013 TO MAY 2014, LA HABRA HTS, CA}
-I have been responsible for a 5yr old thoroughbred mare named cocoa who had needed a serious restart when I first started riding her. She had bucking, jigging, rearing, crow hoping issues and would leave terribly long before jumps.... (read more) Friday a 9yr old thoroughbred stallion just needing exercise, show prep, suppling, refinement and to be taught how to move his body. I right handed Terry Guerin while she was training offering bits of my opinions of how I think the horse or rider are doing at that moment. Getting on horses before and during training sessions, shows, clinics, and lessons to school the horses to ensure that they wont act up, and that they do not create any bad habits or are ruined by amateur riders. Have had to doctor horses at times giving syringe type antibiotics, wormers, cleaning cuts, or abrasions and dressing them with proper care, putting in eye medication, icing, stretching, applying ointments/cooling agents and wrapping legs when injured. I am also in charge of getting all gear, tack, and first aid kits together on show days. Making sure the day goes as smoothly as possible, and that everything is organized, and where it should be. While working for her I attended the 2014 Equine affaire where I rode cocoa in all of the arenas on the Pomona fairgrounds the Thursday before she was supposed to be rode in the Gina Miles clinic, The El Rodeo hunter/equitation shows where Terry had me get on because cocoa was acting up, or rider was fighting her not riding her, and to the LA Equestrian center in Burbank where I rode her in all arenas around the grounds through the jumps in the jumping arenas, and did some flat schooling before the rider was going to get on to ride. I exercised both horses regularly while getting coached during jumping sessions by Terry. After working here I have become very comfortable handling a stallion in all sorts of situations. I took on any lessons/clients Terry couldn't handle herself while she shadows me and offers me pointers or tips.

{TENNESSEE WALKING HORSE TRAINER, NOV 2011 TO FEB 2015 ,PRIVATE FACILITY, HACIENDA HEIGHTS, CA}
-My main responsibility's were to break and train Sawyer a 5yr old gelding never under saddle and no ground work, Dillon a 5yr old very green broke gelding, Bella a 17yr old mare with bucking and rearing issues, Justice a 10 yr old gelding with taking off/panic issues & very green, Indy a 8yr old gelding with a jigging problem who thinks he's a stallion, and Ivy a 6yr old mare with no flexion, a rearing issue and no whoa all are Tennessee walkers. Since I started in November 11' I have put each one of these horses through my training program starting with ground manners, insane amounts of ground work such as joining up training, suppleness, flexion, side passing from the ground, standing in place when asked to "stand", and yielding (pivoting) back legs to body pressure. I then move each horse up to the second stage which is manners while saddling (standing still when mounting, NO JIGGING), simple patterns like figure 8s, head set, and flexion under saddle. Then finally when the horses are flexible, paying attention, and in the right condition I finish with neck reining, pivots, and leg yields. All horses after going through my training process had made a 180 and have turned into easy going, supple, riding horses without issues.

{HORSE EXERCISER/TRAINER, PRIVATE FACILITY, NOV 2009 to MAY 2010 MILFORD, OH }
-I was responsible to train a very green 2yr old gelding named manny for the owner. I exercised him and taught him manners teaching him what the right state of mind was. He was a green horse with a beginner rider. I basically had to teach the owner how to ride him he wasnt a bad horse just had no direction or any formal training.

{HORSE EXERCISER, LAKEWOOD EQUESTRIAN CENTER,LAKEWOOD,CA,04'-05'}
-I exercised one of the trainers horses at the equestrian center his name was buckwheat. She did not have time for him, so a couple times a week I rode him for her for free. Not only that, but she had another gelding named dobby whom I used to walk him out around the barn for her because he didn't get out much either and was pretty hard to handle at times.

{HORSE EXERCISER, JUNE 2007 to DEC 2008 MILDRED ARABIANS, NORCO, CA}
-My Main focus was riding a 12 year old Arabian gelding Flame whom the owner of the barn Milly claimed no one wanted to ride him because he was to hot headed. So I worked with him in the arena cleaned him before, and after workouts. I mainly worked on his attitude while under saddle, and ended up creating an amazing friendship with him. Not only did I work with him but I also helped her with her stallion, and other horses that needed turn outs, and what not's.

{HORSE APPRENTICESHIP, 2003 TO NOW.
ONYX EQUINE OWNER JERRI LEWIS, NORCO, CA}
-I trained under Jerri Lewis since I've met her in 2003. She taught me almost everything I know. Jerri got me involved with the CFTA, and helped me find people to ride for. She owns Shazada an Arabian reining champion stallion of Onyx equine. I used to take lessons on him when I began getting serious. Jerri found me my first horse Frosty we bred her to her stallion. She helped me with my mares pregnancy, and everything I needed to know before and after the birth. I helped train one of her stud colts Tsunami Shazada while she looked over my shoulder. From a young age I've been handling young horses, stud colts, and stallions thanks to Jerri. Every big step in the horse community I've ever made Jerri has always been there helping me become better. To this day if I have questions or help I still go to her for things.

{HORSE OWNER SINCE I WAS 8 I AM NOW 27 (8/2/89) NORCO, CA}
-I fed my three horses every morning, and night. Daily exercise and training sessions for my Arabian mare, and Arabian filly were a must. As well as Weekly training for weekend shows I was riding for 3 different people on 5 different horses(Josiah's Echo, Cinnamon Frost, Midnight Valentino, Princess, Whiskey's Irish Lace). I had to train with each owner at least a couple times a week. I Trained with Sandy Mercer for hunter jumping in Lakewood at the Lakewood equestrian center where I also was in the show circuit riding (Madam). Not only was I riding for these other people, but I was riding for myself in Gymkhana for the Riverside Ranglers on (Cinnamon Frost). I bred my mare and helped her when the foal was being born,. I've handled many different stallions, and stud colts very familiar on how to handle them. I had my horses living in my backyard, so I know daily behavior normal or not. I have raised a few different foals 2 of them being my own, one of them being a filly that was untouched by people her first six months of life because the owner didnt pay her board so she couldnt take her out she was locked in the stall so at 16 i took her on. I owned an arabian filly that I bred and raised myself and an Arabian stud colt from Sept 2013-April 2015 he was 6mos old when he was bought for me. I owned them both till they were 2yrs old. they lunged, free lunged, joined up, lead nicely, my colt lead nicely past mares, they picked up all feet, bathed, clipped, tied, stood for farrier, stood to be saddled, & ground drove when they left me to go to there new homes.

Training
We do individual lessons (one on one w/ me), Parent/Child Classes (Parents participate in teaching their children basic horsemanship), Birthday Parties, Basic Horsemanship, Summer Time Programs, and our Fun on the Farm Program ( feed and visit with farm animals, a class project, & a pony ride). we also offer Girl/Boy Scout & American Heritage Girl where you can earn your Merit Badges.
Trainer: Brianne Lembke